The AAC production process includes raw material preparation, batching and mixing, pouring, reinforcement, pre-curing, cutting, autoclaving, and packing.
The entire line allows process to flow smoothly, from start to finish. The independent circulating line of mould, side plate and autoclaving car can lead the object to the original location and get ready for the next work cycle. The production line can achieve the real total automatic production without waste.
Making full use of the land with the advanced overhead conveying system, special overhead cross moving system and hydraulic control system for de-moulding machine, semi-product stacking machine, separator and clamping machine, the investment of simple workshop structure can be reduced.
AAC Panel (Autoclaved aerated concrete slabs), it is mainly composed of silica sand, cement, aluminum powder, lime. The double layer, two-way steel net which is anti-rust & anti-corrosion inside the panel. The AAC panel which go trough high t

WHAT IS AAC?
The AAC production process includes raw material preparation, batching and mixing, pouring, precuring, cutting, autoclaving, and packing. With decades of experience in serving the AAC panel production machinery industry, we can supply customers with quality AAC production lines with capacity ranging from 150,000m3 to 40,000m3 per year.

Chart 1 the parameter of the processes

THE ADVANTAGES OF AAC: 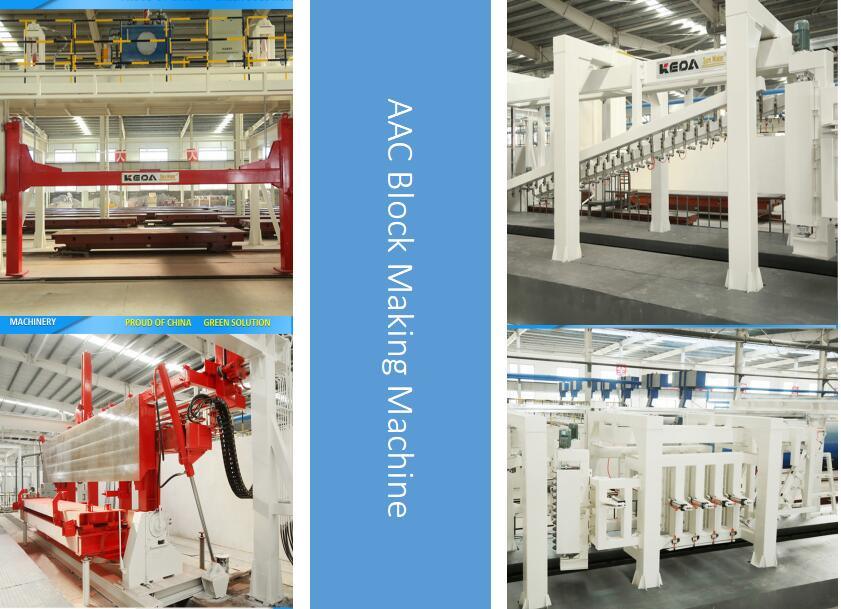 Special cutting design : All the steel wire columns are fixed on two main oblique  beams of cutting machine and each pair of the columns is used to fix only one steel wire , so that the horizontal  cutting machine can avoid the settlement cracks problem in thin block and panel cutting , and achieve the minimum horizontal cutting thickness of 50MM block out of a whole mould. The integral swing frame of the vertical cutting machine can ensure the side plate replacement , the cutting action can be synchronized with ferry replacement. With automatic detection system . the broken wire can be timely detected. 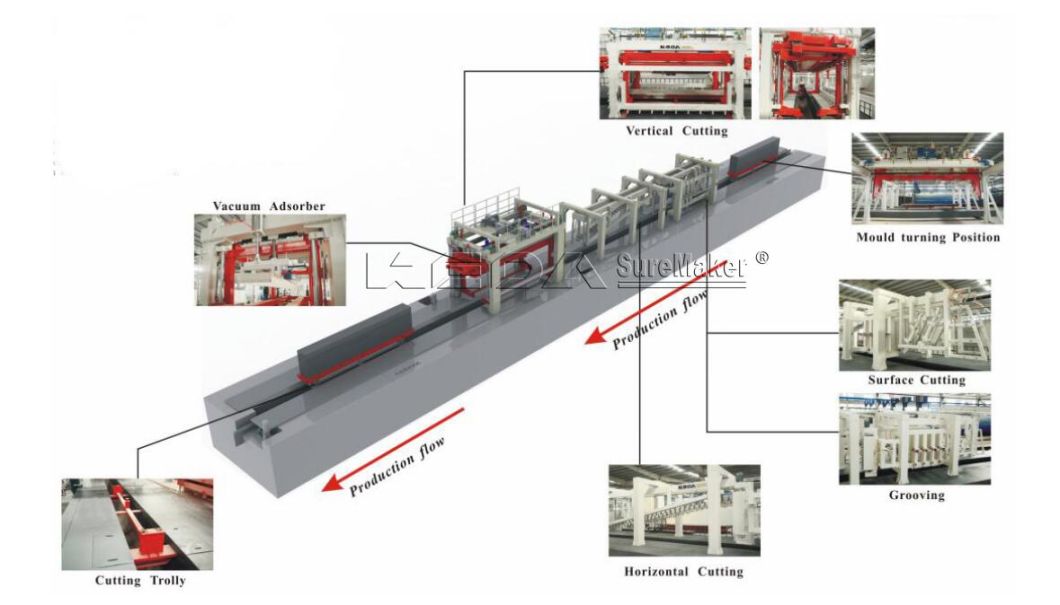 (1) The lime and gypsum will be crashed and ball milled after entering the factory, batch production for this section working system. The raw materials is continuous crashed into grain which granularity is less than or equal to 25mm, and then be put in the storage respectively through 3-pass splitting by bucket elevator. Lime and gypsum-grain will be fed in proportion through speed belt scale and into ball mill for mixture levitation through the respective baiting splitting, When the fineness reached 3500～4000cm2/g, the lime and gypsum-grain will be sent into cement silo through bucket elevator for storage.

(2) The sand is transported to stacking place by dump truck for use.

(4) Steel rebar rolls into factory by car, after straightening & cutting & welding to mesh cage, then put to yard storage after de-rusting & anticorrosive & drying.

(5) The poured mold car transfers to curing area for gas-forming & initial setting, temperature in curing room is about 40 to 45℃, curing for 150 to 180mins, the mold car is pull out of curing room when reached the cutting strength. For panel, the cake transport to rebar insert area, insert the steel rebar into the mould car after curing, and then transport to curing area for forming, temperature of curing room is 40-45℃, stop for 180-240min, up to strength level, pull out from curing to draw-out steel rebar, then the mould car goes to cutting area after several minutes curing.

(6) Mould will be transported to the cutting area when the curing reach to cutting requirements, turning table separates the mould and turns the cake to 90°spaced on the cutting car. The car carried cake achieves six sides cutting through horizontal and vertical cutting process(length±3mm～width±1mm～±1mm). For panel, mould transfer to rebar insert area after pouring, then insert the steel rebar into mould after pouring, then transport to curing area for forming, the temperature of curing room is 40-45℃, stop for 180～240min , up to cutting strength, pull out from curing room to rebar draw-out area, then transfer to cutting area for several minuets curing.

(7) Put the cake on the semi-finished product turning table by crane after cutting, the cake turned to 90°by turning table to be peeled the bottom & top leather, then be turned again to original position, next be stacked on the steam curing car by the semi-finished product stacker, marshaled steam curing car be put into the autoclave for high temperature (200 ℃), high pressure (1.3 MPa), autoclave(about 12 hours). Sweep gas in the autoclave be sent to curing area by the pipe.

(8) Finished curing cake will be combined, divided, transfer and packaging after classified placing, separating and clamping treatment. Then sent the after-package cake to the storage yard by forklift. Finished product separated bottom plates will be transported to compound die area by curing car for mould car compounding.  After cleaning and oil brushed, the curing car will be poured for re-use. Then back to the curing car and process the autoclave curing after stacking and grouping.

(9) The recycled waste in production can be made into waste slurry by waste mixer , the stored waste slurry can be reused with raw material. 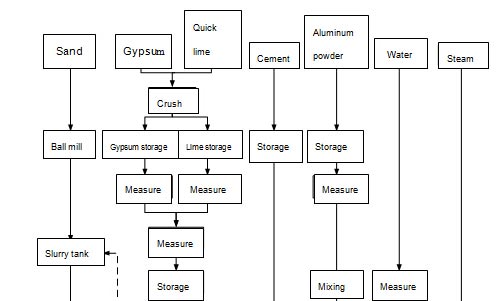 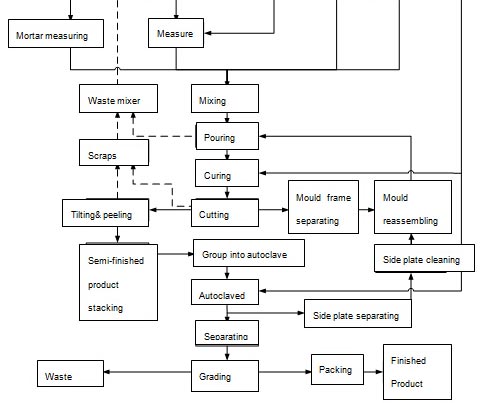 Producing AAC block adopts lime-cement mixing calcium system, can use standard 425# cement, and is according to technical requirements GB 175 General Silicate Cement. Before entering factory with manufacture quality certification, The cement should be used in sequence. Cement technical requirements as blow:
(1) Free CaO content should be not more than 1.5%, CaO content is 60%.
(2) NaCl & KCl content should be not more than1%~1.5%.
(3) Specific surface area 2500~3500cm3/g.
(4) Volume stability is qualified.
(5) Setting time initial setting 1~3h final setting 3~6h.

2.2 Sand
It should be according to the standard JC/T 662 Sand for Silicate Building Products to select. Generally, the higher quartz content in the sand, the better AAC block quality.

Lime is also one of the main raw material. The function is coordinating with cement to provide effective calcium oxide, than makes it working with SiO2, Al2O3 from silica material under hydrothermal condition to generate hydrated calcium silicate. So it should be according to JC/T621 Quick Lime for Silicate Building Product standard. Effective calcium oxide content should be more than 65%, the best is more than 80%.

2.5 Gypsum
Gypsum is a modifier during gas processing in the AAC. The regulating effect of gypsum mainly reflects in deferring the speed of quick lime digesting & slurry thickening.
Gypsum should be according to the current national standard, the requirements of Natural Gypsum GB/T 5483. The main chemical compositions of gypsum are CaSO4,CaSO4·2H2O>70%.

2.6 Water
According to the standard, water ratio is advisable to 0.60.